Osborne Landing was located near here along the north bank of the James River across from the Village of Osborne in Chesterfield County. Throughout the 18th and 19th centuries a ferry operated here and the landing was a regular stopping point for commercial vessels until around World War I. The Osborne Turnpike, which connected here with its south of the James segment, was among the earliest artificial roads in the United States. It remained the shortest route from Richmond to Petersburg until 1824, when the Manchester and Petersburg Turnpike was completed. Near here also was the site of the Revolutionary Naval Battle of April 27, 1781 between British General Benedict Arnold and American troops. 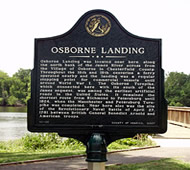