In 1947 the Maybelle Carter family bought the home at 4101 Old Springfield Road here in Glen Allen, Virginia. They performed on local radio stations WRNL-WRVA and the Old Dominion Barn Dance while living in the Richmond area. The daughters attended local schools, including Glen Allen High School. The Carter Family was elected to the Country Music Hall of Fame in 1970 and in 1988 to the Grammy Hall of Fame. In 1993 the US Postal Service issued a stamp honoring the family. In 2001 the group was inducted into the International Bluegrass Hall of Honor, and in 2005 they received the Grammy Lifetime Achievement Award. 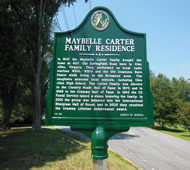