Significant for its ownership by one African-American family dating back to the late 1800s, Mercer Hugh Cosby built the farmhouse in the 1880s on 52-acres. He grew tobacco and had an orchard on the property. The farm passed to his youngest son William in 1952. William Darl Cosby Sr. became a prominent educator in Henrico County, following his service in World War II. He worked as a teacher and principal through the period of school desegregation in 1969. Until his death in 2006, Mr. Cosby was the curator of the Virginia Randolph Museum, a National Register Landmark. 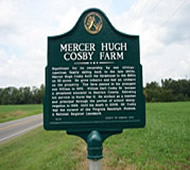