On May 15, 1862 a small federal fleet including the ironclads, the Monitor, and Galena, and three wooden war ships sailed up the James River to try to enter the Confederate capital at Richmond. Their efforts were blocked at Drewry’s Bluff by Confederates with heavy sea coast guns and a channel loaded with sunken vessels. Neither Union ship could elevate its guns to damage Confederates on the high bluff. The Galena received extensive damage during the four hour battle. Two members of the U.S. Naval crew and one U.S. Marine received the Medal of Honor for Valor due to their bravery under fire. The defenders at Drewry’s Bluff saved Richmond from attack by water for the duration of the Civil War. 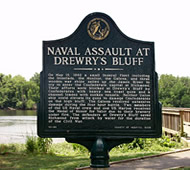