An African American woman, known only as Aggy, was enslaved at Ryland Randolph’s Turkey Island plantation at the time of his death in 1784. Randolph’s will provided for freedom and support for Aggy and her children, but the administrators of his estate denied the provisions of the will, keeping her in bondage. While still enslaved, Aggy became an early civil rights pioneer when she was named as a complainant in a chancery suit filed in Henrico County Court claiming her right to freedom under the provisions of Ryland’s will. In 1790, a decree absolute issued by the court ordered that “Aggy and her two children, Sylvia Anderson and Alexander Philip … be emancipated and recover their freedom.” 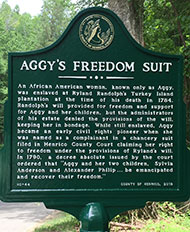