The 1920s were the boom years for construction of gas stations in the United States due to an increase of cars, improved roads and low gas prices. By 1929, there were 143,000 “filling” stations across the nation. Many were built in the “House with Canopy” design of the Courtney Road Service Station, a style that was a 1916 Standard Oil Company prototype. In 1938, the Barlow family owned the station and surrounding land. Selling Sinclair Gasoline and Oil Products, the station was operated by Mr. Millard G. Wiltshire. The station also served as a social hub for the Glen Allen community. 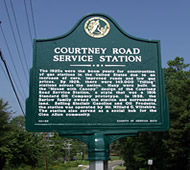