Captain Thomas Harris came to the Jamestown Colony from England in May 1611 on the ship Prosperous with Sir Thomas Dale. In 1635, a patent was issued to Harris for 750 acres. In 1636 this property was called Longfield and later was known as Curles. The land ownership of Harris grew to be in excess of 2500 acres. Harris served as a subscriber in the 2nd Corporation of Jamestown, and served in the House of Burgesses. In 1649, Harris was made commander of the Henrico Militia. Following his death in 1658, the property passed through several hands before being sold to Nathaniel Bacon in 1674. 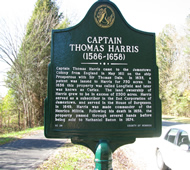