Edward J. Warren, a farmer, was the first owner of the house on 100 acres in 1858. Warren, a private in the 34th Virginia Infantry, was captured by Union Troops and held prisoner at Fort Monroe. The property is first referred to as Belmont in the 1880s while owned by New York native William Coggeshall. In 1916, the house and property became the home of Hermitage Country Club and remained so until the early 1970s. In 1977, Henrico County purchased the site from Hermitage Country Club and opened it as Belmont Recreation Center and Golf Course. 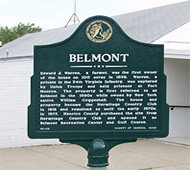