This Church, originally known Mount Olivet African Church of Baptist, was founded May 2, 1867. Its founding congregants, wanting their own church, moved from local North Run Baptist Church and began meeting on 1.18 acres nearby. As the first African American church built in the Yellow Tavern area, the congregation first met under a brush arbor, and then a log cabin, followed by a framed structure, a brick building in 1976, and to a contemporary masonry structure in 2004. Listed among the early pastors were Reverends Timothy Harris, M.R. Gentry, Burrell Toler and James H. Binford. 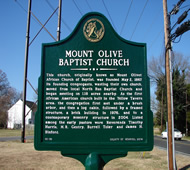