This landmark is near Clarke-Palmore House Museum.

The 19th century house and outbuildings retain the original character while representing the evolution of an early Henrico County family farm. The same family owned, maintained and adapted the property from 1855 to 1999, when it was donated to Henrico County. The house now operates as a museum interpreting life in 1930s America. Open by appointment only, or for special events by Henrico County Recreation & Parks. Visit the park page for details.

1819 – The single story, three-bay house was built by or for Daniel Higgenbotham. Virginia Department of Historic Resources (VDHR) file cites land tax records as evidence of dates. VDHR file states that interior woodwork is early to mid 19th century. The smokehouse and kitchen appear to date from the 19th century.
1855 – John Clarke purchased the property and added a second floor. John Clarke served in the Confederate Army and worked at Tredegar Iron Works.
1861-65 – The house is situated within the inner defense line and in the vicinity of fighting during the Civil War.
1865 – Civil War maps from this period labels the house as “Clarke.”
1910 – The rear addition and porch were added in 1910 by John Palmore. At this time the smokehouse is converted to a pump house and the kitchen is converted to a barn.
1937 –Works Progress Administration (WPA) employee B.G. Gardner, interviewed Estelle Clarke Palmore who dated the second story as 1855, with the “frame part” added to the rear of the house in 1910. Vera Palmore, daughter of John and Estelle Palmore, begins an over 40-year career with Henrico County Public Schools.
1950s – According to Vera Palmore Morton, the entire house was electrified, and an indoor bathroom was installed on the second floor. A single bay front porch replaced the original Greek revival full width porch.
1999 – The house is donated to the County by Vera Palmore Morton in memory of her parents, Estelle and John and her husband George.
2007 – The County of Henrico opens the property as the Clarke-Palmore House Museum. 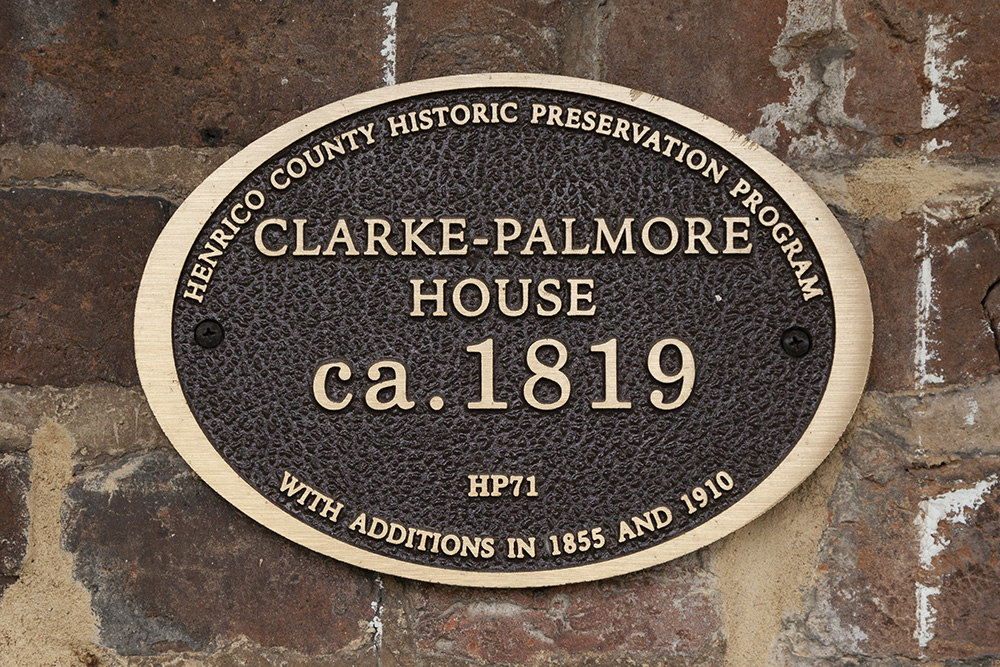