After the twilight battle at Savage’s Station on June 29, 1862, the Army of the Potomac abandoned the final remnants of its line in front of Richmond and retreated through the darkness toward the James River. Once across White Oak Swamp, the Union army deployed at several key spots to challenge the Confederate pursuit. Here at White Oak Swamp Bridge, two Federal divisions-led by Gen. William F. Smith and Gen. Israel Richardson-occupied the heights one-third of a mile south of the swamp. Confederate Gen. Thomas “Stonewall” Jackson, at the head of 25,000 men, arrived on the north bank of the swamp at noon on June 30 and found the bridge here destroyed. The noise of the heavy fighting at Glendale, three miles southwest, “made me eager to press forward,” Jackson later wrote, but he was unable to do so during the remaining eight hours of daylight. The failure of this and two of the other three Confederate columns to press forward robbed Lee of his offensive punch, and allowed for a successful Union defense of the roads to the James River. 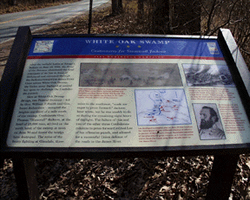