On the night of June 27, 1862, following the battle of Gaine’s Mill, Gen. George McClellan ordered a withdrawal of his Union army to the James River. In the wake of the retreating army, Savage’s Station, located one half mile in front of you along the Richmond and York River Railroad, was ordered abandoned. Having served as the army’s advance supply base during the previous month, the immense stockpiles of equipment, ordnance, and commissary stores located there were to be destroyed. Hoping to catch McClellan on the move, Gen. Robert E. Lee ordered an attack at
Savage’s Station on June 29. Confederate troops under Gen. John B. Magruder encountered the Federal rear guard near the station in the late afternoon. In a twilight battle, Union forces under Gen. Edwin V “Bull” Sumner held back the Southern assaults while McClellan proceeded southward. When darkness put an end to the battle, 444 Confederates and 919 Northerners were counted as casualties. That night, Sumner withdrew from the station and followed McClellan south across White Oak Swamp. 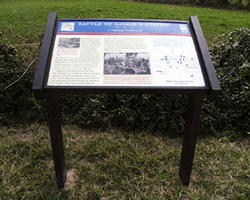