On May 12,1864, this crossing of the Chickahominy River was the scene of a sharp engagement between Union and Confederate cavalry. The previous day, Gen. Philip Sheridan and his Union troopers fought and defeated Gen. J.E.B. Stuart and his Confederate cavalry near Yellow Tavern. Stuart was mortally wounded during that battle. That evening, under cover of darkness and a heavy thunderstorm, Sheridan led his troopers south, through the outer defenses of Richmond and into a potentially dangerous trap. The following morning, the Union commander found himself boxed in with the manned trenched of Richmond’s intermediate defenses in his front, the swollen Chickahominy to his left and Confederate cavalry threatening his rear. To escape, the Union commander chose to force a crossing at Meadow Bridge, where the Virginia Central Railroad crossed the river. Although the Confederates had dismantled the road bridge, the railroad crossing remained intact. The responsibility for seizing this span was given to Gen. George Custer. Throughout the morning and early afternoon, while Southern cavalry pressed from behind and government clerks and workers-turned soldiers sallied forth from the city’s fortifications, Custer worked hard to clear the north bank of the Chickahominy of the stubborn Confederate troopers. After gaining a foothold on the Confederate side of the river, Custer’s men kept the Southerners pinned down while Union pioneers repaired the road bridge and planked the railroad span. By 4 pm, the bridge was open and Union soldiers crossed the swollen stream. Sweeping resistance aside, Sheridan successfully pulled his men out of the trap and pointed the head of his column toward Mechanicsville and out of harm’s way. Two days later, the Union commander led his cavalrymen to the safety of the James River, ending a raid on Richmond begun five days earlier. 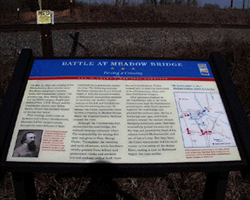