Union Gen. Philip Sheridan used the Mountain Road during his 1864 raid toward Richmond. His lengthy column of 12,000 horsemen passed here on the morning of May 11. The troopers spread out to destroy many miles of railroad track at Ashland, Allen’s Station (now known as Glen Allen), and Hungary Station. Shortly after passing here,
Sheridan’s men encountered J.E.B. Stuart’s 3,000-man command blocking their route, which brought on the Battle of Yellow Tavern. The Sheppard family lived at Meadow Farm during the Civil War. Dr. John Sheppard, a physician and farmer, his wife and nine children all felt the impact of the war. Alexander Hamilton, Dr. Sheppard’s oldest son, was a guard at Libby Prison, a Confederate prison for captured Union soldiers. Since the fall of 1863, the Confederate Government required farmers including Dr. Sheppard to turn over one-tenth of all their crops and meat as a tax in kind “for the common defense and [to] carry on the government of the Confederate states.” The loss of needed crops, shortages of basic consumer items and escalating inflation all contributed to the deteriorating quality of southern life. 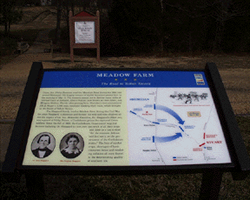