As you watch boats being launched here today, imagine the challenge faced by Union engineers tasked with constructing a pontoon bridge at this site on June 20th, 1864. Under the cover of night, and without alerting nearby Confederate pickets, they floated 25 separate pontoons into place, lashed them together, and secured them against the current. Behind you, Union soldiers labored to set up a defensive line, allowing the engineers to finish their task by dawn. Word did not stop with the completion of the bridge. Continuous bailing and repairs were required to keep the bridge afloat and operational through the end of the war.

In an effort to draw Confederate troops away from the Petersburg defenses, General Winfield Scott Hancock’s 2nd Corps crossed from the south bank of the James here in the early morning hours of July 27, 1864. Later that day, a few miles to the north, they would engage at the first battle of Deep Bottom, a second in August would be equally unsuccessful. However, a third battle in September, spearheaded by two brigades of United States Colored Troops (USCT), resulted in the capture of New Market Heights. 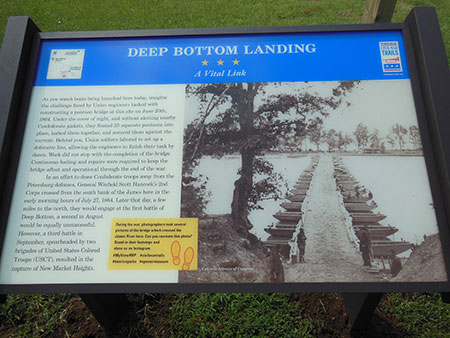