Confederate Attacks on May 31,1862, designed to push the Union army away from Richmond, struck an isolated wing of the Federal Fourth Corps in this vicinity. The heaviest action took place along the Williamsburg Road. Marching from the west, men of Gen. D. H. Hill’s Division broke Gen. Silas Casey’s line and pushed on toward the Seven Pines crossroads east of here. Close-quarters fighting raged in and around Casey’s Redoubt, which stood close to this spot. Hill’s attack unleashed “the most terrible fire of musketry that I have ever witnessed,” thought Casey. Late in the day, Confederate leader Gen. Joseph E. Johnston fell wounded north of here at Fair Oaks. The next day, Gen. Robert E. Lee took command of the army. The encounter at Seven Pines was the largest battle fought in Virginia during the first 14 months of the Civil War. There were more than 70,000 troops engaged and at least 10,000 casualties. 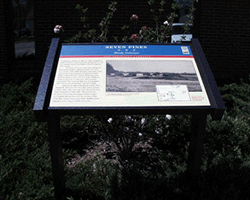