700 feet from the intersection of Seven Hills Blvd and S Airport Drive on the south west side of Airport Drive.
Henrico, Virginia

Early in May 1864, Gen. Ulysses S. Grant hoped to end the Civil War by attacking confederate armies simultaneously throughout the South. The commander in chief of all U.S. armies, Grant, accompanied Gen. George G. Meade’s Army of the Potomac as it campaigned against Gen. Robert E. Lee’s Army of Northern Virginia. Lee sought defended Richmond, the Confederate capital; Grant and Meade maneuvered south and east around Lee’s right flank toward the city. In a series of horrifically bloody battles, the Union generals forced Lee into defensive positions, such as the earthworks you see here, east of Richmond and Petersburg by late June. Instead of battles in the open, trench warfare would occupy the next ten months until Lee evacuated the cities in April 1865. Follow in the footsteps of Gens. Lee and Grant along the Virginia Civil War Trails 1864 Overland Campaign, a 125-mile tour route that allows you to explore more than 60 sites in central Virginia. Please drive carefully as you enjoy the history and beauty along the trail. 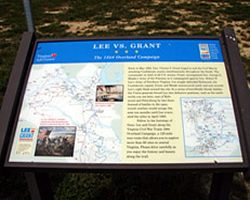