In April 1862, Union Gen. George B. McClellan began marching his huge Army of the Potomac west up the Peninsula between the James and York Rivers from Fort Monroe to Richmond, the Confederate capital. Gen. John B. Magruder’s forces delayed the Federals for almost a month at Yorktown. Reinforced by Gen. Joseph E. Johnston but still vastly outnumbered, the Confederates withdrew fighting up the Peninsula to Richmond. Gen. Robert E. Lee took command of the Army of Northern Virginia when Johnston fell wounded on May 31. Beginning on June 26, Lee counter-attacked and forced the Federals away from the city in a series of actions known as the Seven Days’ Battles. The fighting ended after the bloody Battle of Malvern Hill on July 1. McClellan eventually withdrew to Fort Monroe. Follow in the footsteps of one of the largest troop movements in military history. Virginia Civil War Trails’ 1862 Peninsula Campaign: Civil War in Tidewater is a 125-mile tour route that allows you to explore more than 60 sites in Tidewater Virginia. Please drive carefully as you enjoy the history and beauty along the trail. 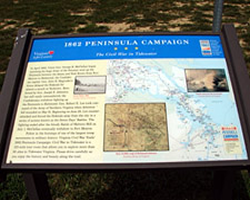