The fortifications directly in front of you are part of the outer defensive line that protected the Confederate capital of Richmond. At 5 A.M. on June 12, 1862, Confederate Gen., J.E.B. Stuart and 1,200 cavalrymen, including several who knew the local roads, left their camps on the Mordecai and Young farms just behind you and passed through the line here. The newly appointed Confederate commander, Gen. Robert E. Lee, had ordered Stuart’s cavalry to probe the Federal army for weaknesses and to locate the positions of the Union flanks. Riding north on the Brook Turnpike (to your right), the column passed through the outer defenses at this point to begin what became Stuart’s famed ride that circled Union Gen. George B. McClellan’s army. In the spring of 1862, before Lee’s counterattack, Confederate engineer Maj. Walter H. Stevens strengthened Richmond’s fortifications, largely with slave labor. Lee utilized the terrain and the strong earthworks to reduce the number of soldiers needed to protect the city at any given location and to free more men for combat. The lines were attacked and abandoned to the Federal army three times during the war. 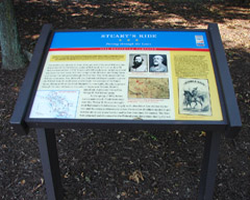