Henrico Animal Protection Police Officer Craig Forehand doesn’t give up easily. When he received a report of a missing dog, Forehand was determined to reunite the pup with his family.

On an early October morning, Theo slipped out of the Durand family’s fenced-in yard. They called Henrico Police for help and learned a dog that looked like Theo had been spotted near Interstate 64 and Broad Street.

Officer Forehand assisted in the search for the wayward Theo and kept his family informed throughout the day. After nearly nine hours, a dog matching Theo’s description was reported in the back yard of a residence about 5 miles from the Durand’s home. Officer Forehand met the Durands on the scene, and reunited Theo with his family. It’s estimated that Theo spent the day on a 20-mile jaunt through western Henrico and crossed I-64 multiple times.

“It was a major relief to get Theo back to his family,” said Forehand.

For his exemplary efforts, Forehand was recognized at the Oct. 26 Board of Supervisors meeting and inducted into the County Manager’s Circle of Excellence in Public Service.

“That was pretty cool,” Forehand said. “I was floored and almost speechless. It’s nice to be recognized.”

County Manager John Vithoulkas added, “Anyone who has experienced a missing pet knows how traumatic that situation can be. I know the Durands are very grateful to Officer Forehand for his work in the safe return of their dog and Theo is grateful as well. Thank you for your commitment to excellence in public service and for all you do for Henrico County.” 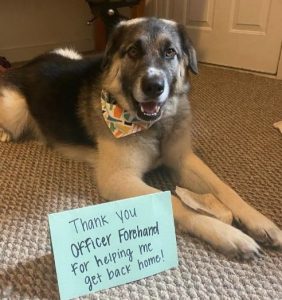 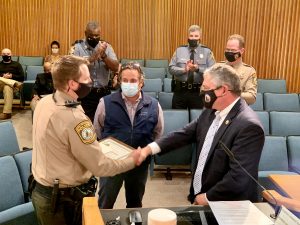