Randy Waddell’s favorite story at the Libbie Mill Library can’t be found on the pages of a book. It’s a nonfiction drama that could have ended as a tragedy.

“My heart stopped and that’s really all I remember,” said Waddell.

On Aug. 1, the Henrico man went into cardiac arrest while sitting at a library computer. Immediately, library staff and patrons teamed together to save Waddell’s life.

Librarian Courtney Melchor spotted the 65-year-old slumped over at the computer.

“We decided he needed some help,” she said. “There were strangers to the left, to the right and across from him that helped get him to the floor.”

Then nurse practitioner Katie Rodman jumped in to help. She and Melchor performed CPR until staff brought them the library’s automated external defibrillator (AED). The nurse practitioner used it to shock Waddell’s heart back into rhythm.

When Henrico County Division of Fire EMTs got to the library, Waddell’s heart was beating again. They rushed him to the hospital.

While hospitalized at VCU Medical Center, Waddell was surprised by a visit from Libbie Mill Library assistant building manager Ha Hoang. She brought his shoes and other things left behind after his medical emergency. Hoang also put a laminated note on Waddell’s car so it wouldn’t be towed from the library parking lot.

“It’s something that’s above the call of duty. That speaks so highly for this library,” said Waddell.

Librarian Lindsey Hutchison added, “We knew we all needed each other to respond effectively.”

The teamwork and timing of that day isn’t lost on Waddell. One staff member took off her sweater so it could be used as a pillow under his head. Another called 911. Others kept patrons out of the area to maintain Waddell’s privacy.

He believes fate may have also been a factor in his survival because it was the nurse practitioner’s first visit to Libbie Mill. She just picked up her library card that day.

“I’ve had time to do a lot of self-reflection of just how lucky and blessed I am,” added Waddell. 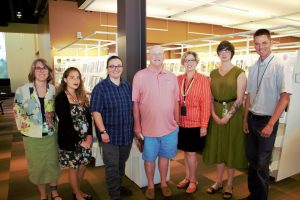