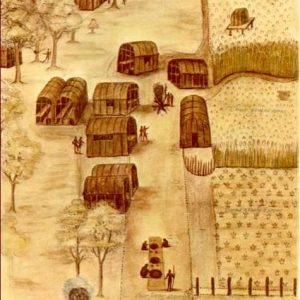 Henrico was home to Native Peoples for thousands of years prior to European exploration. In the sixteenth century, Algonquian tribes from the north began to settle in present-day Henrico County. By the early 1600s, American Indian settlements could be found in coastal regions from New England to central North Carolina. In Virginia, the Siouan tribes settled west of the fall line while Iroquoian tribes occupied lands south and west of the James River. In 1595, Washunsonacock, also known as Powhatan, ruled six tribes within 50 miles of the James River. The Arrohattoc, Appomattoc, Mattaponi, Pamunkey, Powhatan and Youghtanund were the core members of the Powhatan chiefdom. This empire expanded to include 25 tribes whose territories were well-defined. The structure of these tribal divisions consisted of a definitive ruling hierarchy. There was a council, or cockarouses, a group of shamans or priests, and a weroance, or chief, who inherited the ruling position matrilineally. This practice suggests greater gender equality in Algonquian society than that of English society at the time.

Virginia Indians domesticated a variety of plants to be used as sources of food, including sunflowers, maize, beans, and squash. Eastern North America is one of ten sites in the world where independent plant domestication occurred.

In 1607, the Virginia Company of London, a private organization chartered by the crown to settle Virginia, authorized an exploration led by Captain Christopher Newport. The group left Jamestown on a voyage up Powhatan’s River, now called the James River.

On the third day, they sailed to a place occupied by the Arrohattoc Indians, one of the tribes of the Powhatan nation. The colonizers became the first Englishmen to set foot on the soil that was to become Henrico County. Having been fed and entertained by the Arrohattac, the Englishmen departed the next morning. Newport erected a cross, claiming the river and the land for God and England despite the existence of a thriving Algonquian community.