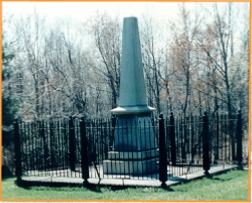 The Battle of Yellow Tavern and Stuart’s Mortal Wound —

Late in the afternoon of 11 May 1864, Maj. Gen. J. E. B. Stuart, the famous Confederate cavalry commander, was mortally wounded on Old Telegraph Road while rallying the left of his line during the Battle of Yellow Tavern. As three Michigan regiments of Brig. Gen. George Armstrong Custer’s brigade fell back after an unsuccessful frontal charge, Pvt. John A. Huff, 5th Michigan Cavalry, fired the shot that struck Stuart in the abdomen. Maj. Gen. Fitzhugh Lee assumed command of Stuart’s forces, as Stuart was carried by ambulance to Richmond. There, in the home of his brother-in-law, Dr. Charles Brewer, Stuart died on the evening of 12 May. The monument was erected by veterans of Stuart’s cavalry in 1888.

To reach the monument, travel north on Brook Road (US Route 1) from the I-295 interchange. Take a right (heading east) onto Virginia Center Parkway. Travel about half a mile and then go right (south) onto Telegraph Road. The monument is about a tenth of a mile south on the right (west) side of this quiet residential street.