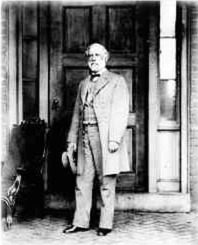 Many important Civil War battles were fought on Henrico soil, including the battles of Seven Pines, Savage’s Station, Glendale, Malvern Hill, Yellow Tavern, New Market Heights, and others in defense of Richmond. The National Park Service’s Richmond National Battlefield Park Web site is an excellent resource for details on these battles and other topics related to the Civil War in Henrico and the Richmond metropolitan region.

In the northern part of the county at Brook Hill plantation, an earthen fort was constructed at the recommendation of General Robert E. Lee to guard Brook Turnpike (now U.S. Route 1), a major route into Richmond. To the east on Nine Mile Road, Lee made his headquarters at Dabbs House. In the next century, this historic structure would become part of Henrico’s Eastern Government Center and for many years served as the eastern precinct headquarters for the Henrico Division of Police. 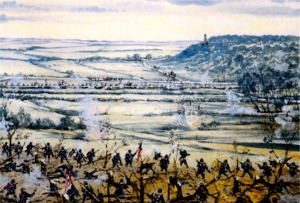 At New Market Heights on September 29, 1864, Union black infantry troops dislodged Confederate defenders in a heroic action for which fourteen men received Medals of Honor. Two hundred more received a special medal commissioned by their general. Click this National Park Service link to read more about these troops and the battle they fought.

Many Civil War sites in Henrico and the surrounding area can be visited on-line
and on the ground. Begin your journey via the National Park Service’s (NPS) Richmond National Battlefield Park web site and visitor centers. Also available on the NPS site are several park maps including a driving tour map of the battlefield park areas. Our Henrico Recreation and Parks Department has an excellent listing of Civil War Trail markers located throughout the county. And don’t miss the White House of the Confederacy, located in the City of Richmond.