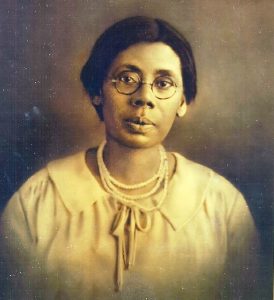 Virginia Estelle Randolph was born in Richmond, Virginia, in May 1870, and was the second of four children to formerly enslaved parents. She attended Baker School, the first public school for black students in Richmond. At the age of 16 she graduated from Richmond Colored Normal School, now known as Armstrong High School.

Virginia began her teaching career in Goochland County around 1890. She secured a teaching position with the Henrico County School Board at the one-room Mountain Road School in 1894. The school was in disrepair, and she noted on her first day: “I enrolled 14 pupils. The school was old, and the grounds were nothing but a red clay hill.” Virginia set out to improve the school appearance inside and out by whitewashing the building, planting flowers, and even purchasing driveway gravel with her own salary. She traveled to homes throughout the county to gain the support of the parents by creating Willing Worker Clubs and school improvement leagues.

In 1907, Quaker philanthropist Anna T. Jeanes established a one-million-dollar fund to specifically support black rural schools throughout the South. In 1908, Jackson Davis, Superintendent for Henrico County Schools, applied to J. H. Dillard, president and director of the fund, for assistance in paying the salary of a supervising industrial teacher to travel to each of the black schools in Henrico County. Having firsthand knowledge of Randolph’s extraordinary success, Davis nominated Randolph for the position, and in October 1908 she became the first countywide Jeanes Supervising Industrial Teacher in the South. Henrico had more than 20 black schools, and Virginia traveled to each one weekly to assist teachers with curriculum and soliciting community support. The report of Virginia’s first year became known as the “Henrico Plan” and was distributed to Jeanes teachers across the south.

On March 30, 1908, Miss Randolph conducted the first Arbor Day Program for a black school in Virginia. On that day, she and her students planted twelve Sycamore trees, naming them for each of the Biblical 12 disciples.

Virginia was determined to raise the funds necessary to build an industrial arts high school in Henrico. After raising the money through private subscriptions and events, she purchased property in 1910 which was then deeded to the Henrico County School Board. In 1915, the Virginia E. Randolph Training School was named in her honor.

Virginia E. Randolph retired in 1949 as the supervisor of black schools in Henrico County. At the time of her retirement, the Mountain Road School where she started with 14 students now had 400 attending.

Ms. Randolph died March 16, 1958 and was later reinterred on the site of the education center which still bears her name. On November 8, 1970, the Virginia Randolph Home Economics Cottage was dedicated as a museum in memory of Virginia Estelle Randolph, a pioneer educator, a humanitarian, and a creative leader in the field of education. In 1976 the museum was named a National Historic Landmark by the United States Department of Interior National Park Service. The Virginia Historic Landmarks Commission designated the museum a State Historic Landmark and the original Sycamore trees were named Historic and Notable Trees in Virginia.