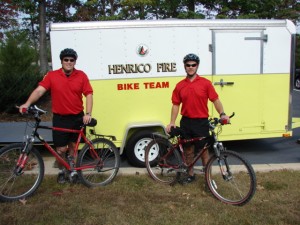 The Bike Team was formed to enable the Division of Fire to respond in a more efficient and effective manner to emergencies at events, which cover a large area but have limited apparatus access due to crowds, lack of roads, or geographical features of the area. The Bike Team is regularly deployed at events such as NASCAR Sprint Cup races, Indy races and the State Fair. The team currently has forty members.

The Division of Fire Bike Team usually operates four teams of two personnel. Each team is made up of one Advanced Life Support (ALS) provider and one Basic Life Support (BLS) provider. Between the two members of each team they carry basic ALS and BLS equipment and supplies to include a defibrillator, advanced airway capabilities and cardiac drug therapy. A portable fire extinguisher and Nomex coveralls are carried for minor firefighting capability. 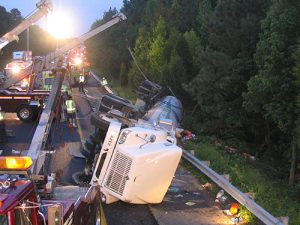 The HIT team was formed in 1981, with the purpose of responding to hazardous chemical emergencies in the County that exceeded the knowledge and capabilities of the average first responders. In 1987, an agreement was signed with the Virginia Department of Emergency Management (VDEM) that placed the team under a contract for regional response. Thus, upon request of VDES, the HIT team, unless otherwise engaged within Henrico County, will respond to hazardous materials (hazmat) events anywhere in the central portion of Virginia. VDES in turn provides training for the team and reimburses the team for costs incurred while on regional calls. The contract also provides for an annual allotment to be used by the team to purchase equipment and other necessary supplies.

The team consists of approximately 70 members, most are trained to the Specialist level and the remainders are trained to the Technician level. The team responds with three vehicles that carry extensive communication equipment, chemical protective clothing, detection and monitoring equipment, and a reference library.

The team responds to approximately 60 calls a year. Most of these are not full team deployments and are handled by the on-duty fire fighters with the equipment on the truck. The calls range in nature from transportation accidents involving highly toxic acids to chlorine leaks in industrial facilities to illegal drug labs. The most common types of calls involve flammable liquids such as gasoline.

The Vehicles used by the HIT team: 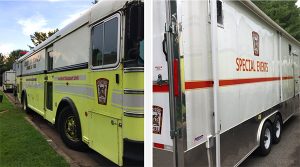 The Incident Support Team (IST) provides logistical support to various significant incidents and preplanned events throughout the county. These may include mass casualties, mass gatherings and support of our other specialty teams (hazmat, technical rescue, ground search, water rescue). The IST can provide additional patient treatment supplies, equipment such as generators and fans, and climate controlled space for patient care or personnel rehabilitation. It can set up two large tents (40’x20’) for extended operations.

The team responds with a large bus type vehicle and trailers pulled by a pickup. It also operates two small utility vehicles that operate off road to transport patients and equipment. The team is located at Firehouse 15 on Mountain Rd in Glen Allen. Many of its members also serve on Henrico’s Incident Management Team (IMT) and the Central Virginia All-Hazards IMT. These IMT’s provide trained management personnel for more complex incidents or large events. 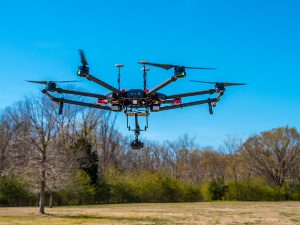 The Henrico Robotics Response Team, formed in 2018, aims to further the Division’s Mission by incorporating small unmanned aerial systems (sUAS) into operations. As advances in aerial technology continued to develop in the public and private sector, the Division recognized the value in this emerging resource. Increased situational awareness, decreased risk to responders, and the timely mitigation of emergency incidents are all supported by the integration of sUAS with the fire service. Examples of application include, but are not limited to:

In addition to the improved situational awareness afforded by basic aerial imagery, the team is also equipped to fly thermal imaging cameras over various emergency scenes. This invaluable tool allows fire service personnel a critical view of missing persons, fire spread, and the structural integrity of compromised buildings. The ability to carry and drop certain items via sUAS is also a function of the team. These items could include throw ropes during water rescue and hazardous materials monitors.

These capabilities combine to provide numerous methods for increasing the efficiency, effectiveness, and safety of operations. The Robotics Response Team deploys out of Firehouse 19, with all of its members trained as FAA certified sUAS pilots. 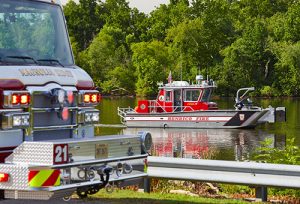 The Search, Rescue, Dive (SRT) Team was originally formed in the early 1980’s as the “Tactical Rescue Team.” Its initial functions were that of high angle and water rescue. High angle rescue was soon given to the truck companies (those companies with aerial ladder trucks), and the team retained only the water rescue functions. For years, the team remained nearly inactive. In 1988, the team became involved in ground search functions; and in 1990, after the Division of Police gave up its diving capabilities, the team began to train its own divers.

Currently, there are more than thirty members on the SRT with expertise in ground search, swift water rescue, and dive rescue. The team is split between Fire House 2 in the east end of the county and Fire House 17 in the west end of the county. In partnership with the County’s Sheriff’s Department, the team also works closely with “Project Lifesaver.”

The SRT is also part of the Marine Incident Response Team (MIRT) through a partnership with the Port of Virginia. This partnership provides valuable training to the members and resources to the citizens of Henrico in the event of a water-borne incident. 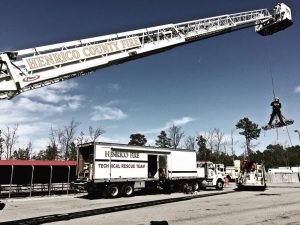 A need to coordinate regional resources was identified during the early stages of team development and this regional response concept was formalized in 2004 through a Technical Rescue Mutual Aid agreement with Chesterfield County Fire Department. Regional cooperation has also expanded to the neighboring jurisdictions of Richmond and Hanover. The Central Virginia Technical Rescue Team (CVTRT) was created from the cooperative effort of these four jurisdictions. CVTRT created a platform so the four teams could train together on a quarterly basis and create a combination team for an annual training event known as Rescue Challenge. There have been several incidents in which the teams have integrated their personnel and equipment in order to mitigate the situation. A history of call locations not only include Henrico County but also extend to locations such as Emporia, Callao, Prince Edward County and Caroline County.

Henrico County is also a participating agency with FEMA USAR VATF-2, based in Virginia Beach. The Division has twelve (12) personnel rostered with VATF-2. The job functions of these personnel include component assignments within Rescue, Haz-Mat, Logistics, Plans, and Medical. Personnel have participated in deployments since 2012 to include Hurricane Sandy in New York, Hurricane Harvey in Houston, and Hurricane Maria in Puerto Rico.