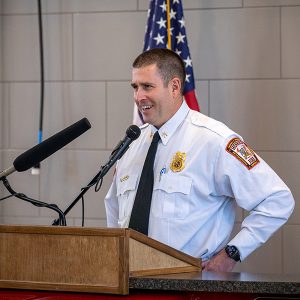 Jackson Powers Fee Baynard was named chief of the Henrico County Division of Fire on Jan. 28, 2023. He joined Henrico Fire in 2003.

During his 20-year tenure, Chief Baynard has served in various roles of leadership and has gained vast experience in fireground operations and event and incident management. He’s been an assistant chief of operations, as well as a battalion chief of special operations, during which time he oversaw homeland security response. In 2020, Chief Baynard was assigned to lead Henrico’s emergency management team and led the county’s initial response to the COVID-19 pandemic.

Chief Baynard has a bachelor’s degree in health science from James Madison University in Harrisonburg, where he also was a volunteer firefighter, and a master’s degree in human resource management from the University of Richmond. He holds several professional certificates, maintains various fire-service appointments and memberships, and has accumulated hundreds of hours leading classroom instruction.

Additionally, Chief Baynard has multiple accolades for service and valor, including the Medal of Merit and the Life Saving Award from Henrico County, and the Order of the Shining Knight award from VCU Health.

As fire chief, Baynard will oversee an annual budget of more than $80 million, a complement of 638 sworn and civilian personnel, and 22 firehouses that respond to more than 54,000 calls annually.

Chief Baynard and his wife, Barb, live in the Richmond area and are proud parents to two boys.