Thousands of Americans die every year in residential fires. Most of these deaths are not from heat of flames but from inhaling smoke and toxic fumes. Smoke is actually the particles of combustion generated by what is burning – paper, wood, chemicals, plastic, upholstery or other fuels.

When a smoke detector senses smoke, an alarm automatically sounds. Most fatal home fires occur between 8:00pm and 8:00am. Fires often generate lethal amounts of unseen smoke and fumes well before flames are visible and before heat makes residents feel uncomfortably warm.

As a result, many people who die in home fires are asleep and never wake up. When carefully purchased, installed and maintained smoke detectors can prevent such needless deaths. Smoke detectors buy time to get out of the house fast – before toxic fumes accumulate to lethal levels.

Quality, not price, should be the determining factor when buying smoke detectors. Check for the following:

Ionization – Contains a small amount of radioactivity that conducts electricity. Electric current flows continuously between two electrodes in the chamber. When smoke particles enter, they disturb the flow, causing the alarm to go off.

Photoelectric – Contains a beam of light and a photocell within the chamber. When smoke enters, it deflects the beam, causing it to strike the photocell and set off the alarm. 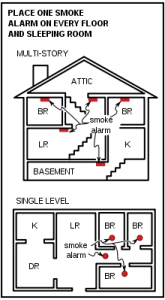 The differences between the two types are generally not critical, since the difference in response time is only a matter of seconds. Since most home fires produce a rich mixture of smoke types, with detectable amounts of both large small particle smoke early in the fire’s growth, either type will meet most needs. 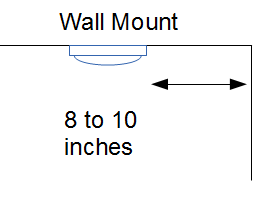 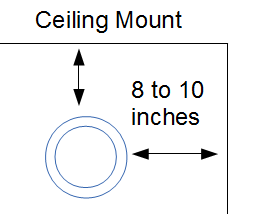