Henrico County and the YMCA of Greater Richmond will partner to build and operate the Henrico Aquatics Center, an indoor swimming facility that is expected to open in early 2020 on North Laburnum Avenue.

“An indoor recreational pool has long been a dream for Henrico County,” said Board of Supervisors Chairman Frank J. Thornton, of the Fairfield District. “We are thrilled to partner with the YMCA of Greater Richmond to make this dream a reality. The Henrico Aquatics Center — like the new Fairfield Area Library across the street — will be a wonderful addition to the Laburnum corridor, promoting exercise, good health and endless fun for the entire community.”

Officials from Henrico, Henrico County Public Schools and the YMCA of Greater Richmond announced plans for the $8 million, 20,000-square-foot aquatics center today during a news conference at the Eastern Henrico Recreation Center. The recreation center is across Watts Lane from the 6-acre site where the aquatics center will be built.

The facility will feature an eight-lane, 25-yard pool and a warm-water instructional pool with zero-depth entry, a family spray area and a waterslide. In addition, the center will include family-friendly locker rooms, retractable spectator seating and parking.

“The Henrico Aquatics Center will be a game changer for youth and families,” County Manager John A. Vithoulkas said. “In addition to family swim times, the facility will offer swimming lessons, host practices and meets for our high school swim teams and get plenty of use by Henrico’s youth summer camps and community groups like the Police Athletic League.”

The YMCA of Greater Richmond currently has 17 locations throughout the region. The Henrico Aquatics Center will be located roughly 5 miles east of the Northside YMCA and about 9 miles northwest of the Chickahominy YMCA.

“The impact this aquatics center will have for Henrico County is tremendous,” said Tim Joyce, president and CEO of the YMCA of Greater Richmond. “Together, we are investing further in our youth by giving them access to life-saving aquatic skills. The Y believes that is something every child should be given access — no matter their zip code or financial situation. This project is an extension of the Y’s continued commitment to accessibility, opportunity, equity and inclusion.”

“Academics are the core of what we do, but that’s not all we do,” she said. “Preparing students to be ‘life ready’ involves key partnerships of community stakeholders. In this instance, a community-supported aquatics program would allow us to add one more layer of critical ‘life ready’ skills to prepare students for the rest of their lives.”

Henrico will contribute $8 million to the YMCA of Greater Richmond to fund construction and other project costs as well as finalize a 20-year lease of the property. The nonprofit organization will build, manage and operate the facility, which will be open to the public through means-based memberships as well as daily rates. 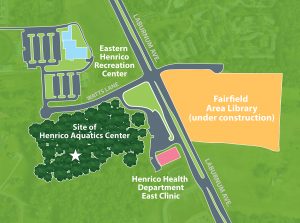 Henrico has been working on plans for an aquatics center since early this year. At a retreat in January, the Board of Supervisors identified a recreational pool as a priority for the community and asked county staff to identify potential partners. The area along Laburnum near Watts offered a county-owned site as well as complementary public facilities nearby. The Eastern Henrico Recreation Center opened in 2011, followed by the Henrico County Health Department East Clinic in 2014. In addition, a new Fairfield Area Library is under construction on a 10-acre site southeast of Laburnum and Watts, with an opening expected in October.

The Board of Supervisors is scheduled to consider the appropriation of funds and lease agreement for the aquatics center after public hearings on Dec. 11. The board also will consider at that meeting authorization of an operating agreement with the YMCA of Greater Richmond. Construction would begin in March, and the aquatics center would open in early 2020.