Some 2,300 baseball and softball players on 130 teams — ranging in age from 8 to 18 and representing all regions of the country — are descending on Henrico’s fields and facilities through July 28 for the Triple Crown U.S. Baseball Championships and Babe Ruth League, Inc. baseball and softball tournaments.

The nationally recognized events will bring thousands of visitors to Henrico and the metro region as well as a boost for area hotels, restaurants and other businesses.

Henrico County will welcome close to 1,500 top high school baseball players from around the country — as well as college coaches and a nationwide television audience — when the Triple Crown U.S. Baseball Championships take place July 18-28.

This year marks the fourth consecutive year Henrico and the metro region have hosted the Triple Crown tournament. This year’s event is expected to bring at least 5,500 visitors to the area and provide a $3.95 million boost to the local economy, according to Richmond Region Tourism.

Seventy-five teams from 21 states — ranging from California and Washington to Minnesota, Missouri, Connecticut, New York, Texas and Virginia — will compete at 16-under, 17-under and 18-under age divisions. A number of teams from the metro area are included in the field as well. Games will be played at several county facilities, including Glen Allen Stadium at RF&P Park, Dorey Park and Tuckahoe Park, as well as The Diamond and other sites in the metro area (a complete schedule is available at www.triplecrownsports.com). All games are open to the public. 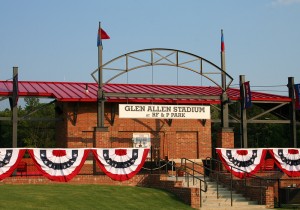 The CBS Sports Network will broadcast live nationwide the “North vs. South” 16-under/17-under all-star game from Glen Allen Stadium at RF&P Park at 6:30 p.m. Monday, July 22. Admission is free. The game will feature a tribute to the late Paul Keyes, the longtime head baseball coach at Virginia Commonwealth University who passed away in November. Keyes helped bring the Triple Crown U.S. Baseball Championships to the area for the first time in 2010.

Neil Luther, director of Henrico’s Division of Recreation and Parks, said the event showcases prospective college athletes and attracts coaches from college programs including Richmond, Maryland and Butler to scout players. He also said the event is another highlight for Henrico’s growing sports-tourism program.

While the Triple Crown tournament is underway, more than 800 boys and girls from states throughout the Southeast also are competing on Henrico fields in the Babe Ruth League, Inc. Southeast Regional baseball and softball tournaments.

Play has begun at RF&P Park and Dorey Park and will continue through July 21. Fifty-five teams, with players ranging in age from 8 to 16, are participating. Teams have traveled from Alabama, Florida, Georgia, North Carolina and other states in the region to play in the tournaments. Teams from Virginia and Henrico are competing as well.

The Babe Ruth and Triple Crown tournaments will combine to bring approximately 2,300 youth athletes and close to 10,000 visitors to Henrico and the metro region. The events are expected to inject nearly $5 million into the local economy.

“These visitors will stay in our hotels, eat in our restaurants and look for other ways to enjoy their time here,” said County Manager John A. Vithoulkas. “Events like these represent a great opportunity for Henrico to highlight all that it has to offer in terms of sports tourism and tourism in general. They also are a great way to create more income for our businesses.”

Additional information is available at www.VisitHenrico.com.