COVID-19 outbreak in Henrico Jail led to over 200 positive cases.

Most are now in recovery. 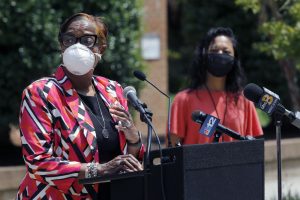 Almost all of the 200 Henrico inmates who tested positive for COVID-19 over the last month are now recovering, officials said, signaling the end of an outbreak that infected nearly two-fifths of the inmates at Jail West.

In an interview Wednesday, Sheriff Alisa Gregory said there are seven active cases still in the jail, and that only two people have been hospitalized. She said both have since recovered.

“I’m so grateful to be where we are,” she said.

The county announced the first signs of an outbreak at the jail in early July after six inmates complained of mild symptoms of the disease. About a week later, the county government held a press conference announcing that mass testing of the county jail system’s 1,150 inmates and 270 employees resulted in 131 positive tests.

Further testing through the month, 1,771 in all, resulted in 79 additional positives. Of the 210 total positive cases, 17 were jail employees.

Gregory said two inmates and one employee at Henrico Jail East, which is in New Kent County, tested positive.

At the press conference last month, county officials said about 400 inmates declined to take a test. Gregory said some of those inmates since decided to take a test, but she did not say how many remain untested.

The jail is continuing to isolate inmates and employees who test positive or have not been tested.

Gregory said the sheriff’s department will continue to screen new arrivals at the jail and periodically test around 20% of inmates to make sure there are no further infections. “We’re excited that we can continue [to] test and screen to hopefully prevent the spread and not have a widespread outbreak like we did in the beginning July,” she said.

Melissa Viray, deputy director of the Henrico Health Department, said local health officials helped design the new testing strategy. “With what we’re seeing in the community, we need to remain vigilant,” she said. “Now is not the time to relax.”

Gregory said the county has spent about $353,600 so far to conduct the tests through the health department and BetterMed.

Bounce Back from Addiction