Viewed 4816 times.
On November 25, 2004, the Board of Supervisors amended the 2010 Land Use Plan and Major Thoroughfare Plan recommending Office and Office/Service land uses and concept roads, including Magellen Parkway, for future road improvements.

In May 2002, the County Administration, with the concurrence of the Board of Supervisors’ representative and Planning Commissioner from the Fairfield District, requested the Planning Department conduct a land use study and prepare a recommended land use plan for the area on the north side of E. Parham Road adjacent to Scott Road between I-295 and U.S. Route 1. This request was prompted by several inquiries about new developments and recent rezoning activity in the area. The study area also contains a premier economic development site the County is actively marketing as a potential large-scale, high-end office and office/service development.

Several factors were considered in the study, including levels of traffic, patterns of traffic, compatibility of land uses, existing development, existing 2010 Plan land use designations, levels of service, requests of recent rezoning applications, and known concerns of property owners in the area. As a result of the study, on November 25, 2003, the Board of Supervisors approved the Land Use and Major Thoroughfare Plans shown on the map below. 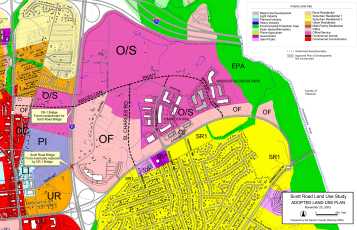 To download a printable version of the Land Use Plan Map click on the map or the link for the map at the top of the page.

One of the primary issues in analyzing land uses in the study area is access. The Study determined a critical need for a major access road (Magellan Parkway) to U.S. Route 1 further north of the current Scott Road / U.S. Route 1 intersection. This would require a new bridge over I-95 and eventually eliminate the need for the current Scott Road bridge crossing. The recommended location for Magellan Parkway would have more direct access to U.S. Route 1 and create a gateway to undeveloped properties east of I-95. It would also help alleviate traffic congestion on E. Parham Road.

This portion of the study area has significant location benefits because of its proximity to I-95 and I-295. The combining of many large and mid-size properties under the Office and Office/Service designations further enhances the area, which is already considered a prime location for economic development. In addition, when accessed by Magellan Parkway and St. Charles Road, the land use designations will aid the County in marketing one of its premier economic development sites.

The Office and Office/Service designations are intended to identify development areas that occur within a planned environment under unified development and operational standards. These areas are envisioned with the same high-quality characteristics as developments in Innsbrook and the Concourse at Wyndham. These developments are generally considered to be “Class A” economic space characterized by large-scale coordinated development, strict design and appearance standards, and additional amenities such as water features and walking trails.

The south side of E. Parham Road is planned for less intense land uses. The designations in this area include Semi-Public, Government, and Suburban Residential 1. Much of this area has been recently rezoned for single-family subdivision development compatible with the existing neighborhoods in the area.

The designated Office/Service area borders both sides of future Magellan Parkway between I-95 and Telegraph Road. This area is envisioned to provide complementary uses to the planned Office and Office/Service uses to the east and take advantage of proximity to U.S. Route 1, I-95, and I-295.

The Office designation on the frontage of U.S. Route 1 adjacent to Magellan Parkway provides the appropriate transition between single-family residential uses to the north and commercial uses to the south. Office uses in this area are intended to have the same high-quality characteristics as the Office-designated properties east of I-95. High-quality characteristics are essential because this will be a gateway entrance to larger office development envisioned for the eastern portion of the study area.

Other designated land uses in the area include Planned Industry, Light Industry, and Urban Residential.

The County makes a variety of information and datasets (“Data”) available for download through this website, henrico.us, and other applicable Henrico County-owned web properties (“The Website”). The County does not warrant that the information is accurate, complete, or timely, and the data is offered for general information. The County assumes no liability for your use of the data.