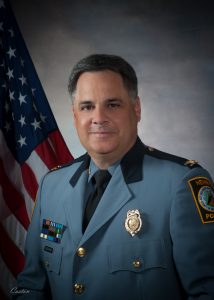 Chief Humberto I. “Hum” Cardounel, Jr.,  joined the Henrico County Police Division on October 3, 1988.  On April 15, 2016, he was appointed as Chief of Police. Chief Cardounel was promoted through the ranks within the Police Division to his previous position as Deputy Chief of Police of the Investigative Bureau. Throughout his career, he served in Patrol, Special Operations, Criminal Investigations, Organized Crime, Police Personnel, Police Training Academy, Media Relations, Internal Affairs, and both the SWAT Team and the Negotiations Team.

Chief Cardounel is a graduate of Henrico County’s Douglas Southall Freeman High School.  He has a Bachelor of Arts degree from the University of Richmond and a Master of Public Administration degree from Virginia Commonwealth University.  He is a graduate of the 221st Session of the Federal Bureau of Investigations National Academy; the Police Executive Research Forum’s Senior Management Institute for Police at Boston University; the Police Executive Leadership School of the Jepson School of Leadership at the University of Richmond; the Virginia Police Chiefs Foundation Institute for Leadership in Changing Times at Virginia Tech; and the Leading, Educating and Developing Program of the Weldon Cooper Center for Public Service at the University of Virginia.

In 2010, Governor Robert F. McDonnell appointed Chief Cardounel to serve as a member of the State Child Fatality Review Team where he served two terms as the team’s law enforcement representative.  In 2016, Governor Terry McAuliffe appointed him to serve on the state’s Charitable Gaming Board, which serves as an advisory board to the Department of Agriculture and Consumer Services on charitable gaming in Virginia.

Chief Cardounel is a member of Leadership Metro Richmond and the West Richmond Rotary Club.  He is also an Assessor and Team Leader for the Commission on Accreditation for Law Enforcement Agencies (CALEA).  Prior to joining the Henrico County Police Division, Chief Cardounel was a member of the Tuckahoe Volunteer Rescue Squad where he served as an Emergency Medical Technician and Cardiac Technician.