When Sgt. Kevin Pridemore arrived at the scene of a single-car crash in August, instinct led him to act quickly. The vehicle was on fire, and its cabin was filled with smoke. The officer shattered a side window and pulled the driver to safety.

“His actions displayed extraordinary courage and selflessness,” said County Manager John Vithoulkas, in awarding Pridemore the County Manager Medal of Honor. “His actions not only saved the victim from catching on fire inside the vehicle, but it could also have saved him from death.”

Pridemore said he felt humbled and honored to be recognized before the Board of Supervisors.

“It’s some people’s worst moments that bring out our best moments,” he said. “When a crisis presents itself, most of us are ready to step forward. We are there to help a stranger while knowing we may be giving the ultimate sacrifice.”

Pridemore joined the Henrico Police Division more than 20 years ago. He comes from a family of public servants. He and his parents have a combined 71 years of service to Henrico. 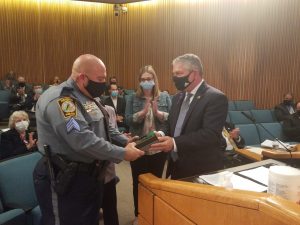