The frantic call came in to 911 after midnight on Thursday, Oct. 21. A woman said she was trapped in her burning apartment. The emergency communications dispatcher calmly told the caller to move away from the flames and into a bathroom. She stayed on the phone with the woman who was having trouble breathing and eventually became unresponsive.

Within minutes, Henrico firefighters arrived at the burning building near West Broad Street and Tuckernuck Road. With heavy flames coming from the front and roof of the apartment, crews strategically attacked the exterior fire and then transitioned to an interior fire attack. Firefighters searched for the caller and located her in the bathroom. They got her out of the building to safety just 14 minutes after the 911 call had been placed.

A doctor who treated the woman at VCU Medical Center says the fire crew’s quick action gave the patient a reasonable chance at recovery. 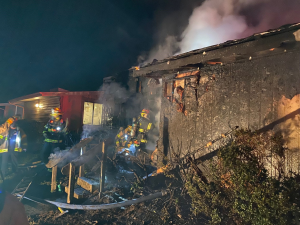 “It’s our opinion that she was most likely literally seconds away from a very different outcome,” explained Dr. Jeffery Fergusson. “Amazing job by all personnel involved in her rescue and care.”

“Team, your dedication to this community and your selfless service

preserved not just one, but many, lives. I can think of no greater action,” said Henrico County Manager John Vithoulkas. “We thank you for all you do for Henrico County and for the hope you give.

Listed below are the individuals recognized for their outstanding actions: 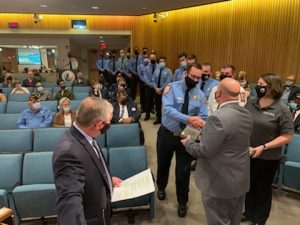