Posted on April 15, 2019
A resident called Social Services to praise the responsiveness of Human Services Specialist Carolyn Ingram. The caller complimented her cheerful demeanor and her commitment to getting him the assistance he needed. He said he especially wanted to thank her and let her supervisor know how much she is appreciated. Great job, Carolyn! 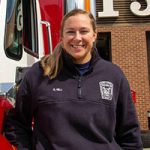 Posted on March 22, 2019
Firefighter Sarah Hill was off duty in Hanover County when she noticed a female motorist in distress as she exited her vehicle on U.S. 301. Hill left her car and approached the woman, who explained that she might be having a heart attack. Hill began to assess the woman’s condition and spoke to her daughter […]
Posted on March 22, 2019
A longtime staff member at Brookland Middle School emailed to compliment School Resource Officer Alex Danilovich. She said she had never seen an officer so involved in the school and shared examples of his interactions with students, including some with disciplinary and legal problems. Using humor, sympathy and understanding, Danilovich allows students to see police […]
Posted on March 22, 2019
A resident emailed to praise Stephanie Steele, a management technician in the Revenue Division of the Department of Finance. The resident said she had assisted in correcting his vehicle registration and was “very helpful, nice…AND very professional.” Great job, Stephanie!
Posted on March 13, 2019
In an email to Police Chief Hum Cardounel, a sergeant praised School Resource Officer Josh Jarvis for his work in mentoring a student. The sergeant noticed a bond between the officer and student during a field trip. The student also sent Jarvis a handwritten note of thanks and took a picture with him. “The importance […]
Posted on March 13, 2019
With frigid temperatures forecasted this winter, Officer Jenifer Gough stopped to give a kit of supplies, including hand warmers, toiletries and snacks, to a man who was panhandling at Brook and Parham roads. The simple act of kindness went viral on social media after a passerby noticed the interaction and sent a photograph to the […]
Posted on March 13, 2019
Representatives of the East End, Evergreen and Woodland cemeteries wrote to thank Public Works for its help in clearing brush, fallen trees and trash from the historic cemeteries. Hundreds of volunteers worked to get the debris to the edge of a road before DPW crews collected and hauled it away. Great work, Public Works!
Posted on October 4, 2018
Officer Ostrowski recently assisted a young motorist who had a blown tire in the rain on a road without a shoulder. He initially tried to elevate the car with a jack to install a spare tire, but the jack proved faulty. He then contacted a towing company and persuaded the driver to allow the car […]
Posted on June 27, 2018
A resident praised Human Services Specialist Ashley Barno after she helped his brother continue to receive food stamps. The man and his brother had come to Social Services to pick up a form that was supposed to be left at the reception desk. However, Ashley was unable to find it. In talking with the men, […]
Posted on June 20, 2018
A resident emailed to acknowledge the excellent service provided by Jay LeReche of the Environmental Health Team. She said that Jay was knowledgeable and patient in helping her determine the work necessary for her failing septic system. He also helped her by describing the process and by indicating which forms needed to be completed. She […]