Three Henrico County Police officers are credited with saving a man’s life. On July 1, Officers Nick Robinson, Jason VonCanon and Brian Wolfe discovered the victim after responding to a call of gunshots on Fayette Avenue.  The man had been shot twice.

“He was in really bad shape,” VonCanon said. “We looked for a pulse, he didn’t have one. He didn’t seem to be breathing.”

Despite the COVID-19 pandemic, the officers didn’t think twice about what they needed to do.

“You have a man who’s dying, COVID didn’t really matter at that point,” Wolfe explained. He started doing chest compressions while VonCanon gave the man breaths.

The officers stabilized the victim until Henrico firefighters arrived to rush him to the hospital.

“We were first on scene, but I don’t think we deserve any more credit than the firefighters, doctors and nurses,” Robinson said. “We all had a hand in it and God used us to help this gentleman out.”

The victim recovered and went home from the hospital just a few days later. These officers say they don’t need or expect attention for their actions.

“We got into law enforcement to help people,” Robinson explained. “We didn’t do it to gain recognition. What we did, police officers do every single day.”

Added Wolfe, “We’re just out here doing our job just like everyone else.” 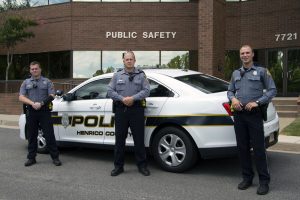