It started with phone calls.

A Sandston woman dialed 911 to report noises outside her home. The elderly stroke survivor who is nearly blind was convinced someone was trying to break in. The calls came into 911 repeatedly for several weeks.

Henrico County Police Officer Brendan Kelly responded to some of Linda Allen’s calls for help. He earned her trust and eventually discovered the woman had squatters in her attic. A family of opossums had found their way inside and built a massive nest.

“Sure enough, she was hearing something in the attic,” explained Officer Kelly.

He reached out to Henrico County Animal Protection Police who evicted the unwelcome critters, but that’s not how this story ends.

Officer Kelly wanted to ensure the same thing wouldn’t happen again. He offered to cut down the small trees on the side of Allen’s home that might provide small animals access to the attic.

“I didn’t really think twice about it. I just knew what I had to do,” said Officer Kelly.

On a Monday afternoon, just hours after wrapping up his overnight police shift, the third-generation cop spent several hours at Allen’s home. He chopped down small trees, pulled up weeds and mowed overgrown grass.

“I’m here to serve my community. That’s what I was raised to do. I’m doing this because I know it’s the right thing,” added Officer Kelly.

Not only did he volunteer his time, Officer Kelly made an impact on Allen.

“Before she was always a little shy to talk to me, now when she peeks through the blinds, she smiles so I know she’s a little bit more comfortable now. We get fewer calls for service,” said Officer Kelly, “If that’s all it takes, I’ll keep doing it.” 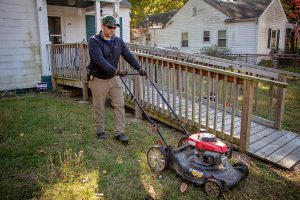 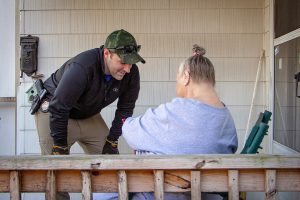 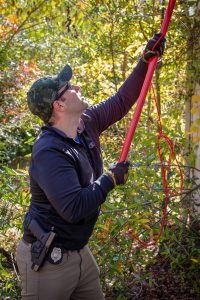