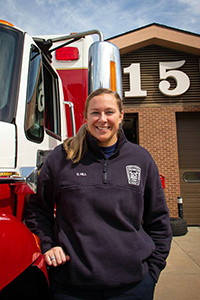 Firefighter Sarah Hill was off duty in Hanover County when she noticed a female motorist in distress as she exited her vehicle on U.S. 301. Hill left her car and approached the woman, who explained that she might be having a heart attack. Hill began to assess the woman’s condition and spoke to her daughter over the phone when the woman passed out, woke up and again lost consciousness. Unable to find a pulse, Hill began to perform CPR on the woman in the road’s median as traffic rushed past on either side. A Hanover Sheriff’s deputy arrived soon after with an automated external defibrillator (AED). Hill used alternating shocks from the AED and rounds of CPR to care for the woman until a crew with Hanover Fire and EMS was able to transport her to a nearby hospital. She is expected to make a full recovery. Hill has been a firefighter for one year. Awesome work, Sarah!