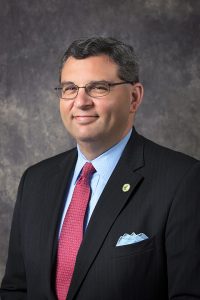 Romanello has served as a deputy county manager for Henrico since 2016, initially overseeing Administration and later Community Services. He worked as county administrator of Stafford County from 2008 to 2016.

Romanello succeeds Gary R. McLaren, who is retiring this month after leading EDA since 2009 and a 41-year career in economic development.

“The EDA is pleased to have Anthony Romanello lead our economic development team following Gary McLaren’s retirement,” said S. Floyd Mays, Jr., chair of the EDA Board of Directors. “Anthony brings impressive public-sector experience to the job, having served a number of Virginia localities in management positions. Anthony’s solid relationships with Henrico’s leadership and his knowledge of Henrico County will clearly serve the EDA well.”

EDA is responsible for advancing business growth and investment in Henrico. Since 2009, the authority has helped the county attract or retain 12,000 jobs and amass capital investments totaling more than $3.5 billion. Recent projects have included the Facebook Data Center, $1.75 billion, as well as investments by Bank of America, $166 million; QTS, $100 million; and Polykon Manufacturing, $56 million.

Overseen by a 10-member board of directors, EDA has a staff of nine and a budget of $4.7 million for fiscal 2018-19, excluding Henrico’s contribution for the Greater Richmond Convention Center. EDA is independent of Henrico’s government, but it receives operating support from the county.

“A robust economic development program is a vital part of Henrico’s long record of success,” County Manager John A. Vithoulkas said. “It allows the county to provide excellent schools, safe neighborhoods and other public services while keeping taxes low for our residents and businesses. With Anthony leading the team at EDA, I’m confident that Henrico will remain a place where businesses look to invest, grow and thrive.”

Romanello earned a bachelor’s degree in history and American government from the University of Virginia and a master’s degree in public administration from Virginia Commonwealth University. As part of his 26-year career in public service, Romanello also served as a deputy county administrator of Stafford and town manager of West Point. In addition, he held several positions with the city of Richmond, including deputy director of human services administration, deputy director of administration of public health and assistant to the city manager.