Cosby joined the Department of Public Works on April 23, 1946 — exactly 72 years ago. Now 90, he serves as a maintenance supervisor and routinely checks conditions and clears debris from county roads. He was first hired by Henrico at age 18 to carry water to county work crews. Cosby’s earliest salary on record was 55 cents per hour.

Over the years, he rose through the department’s ranks, working as a truck driver, equipment operator and labor foreman. He has served all nine of Henrico’s directors of Public Works and six of its eight county managers. 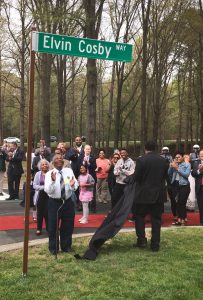 “He has watched leaders come and go. He has seen equipment transform from mule teams to high-tech machines. He has faced adversity and personal tragedy, but he has triumphed,” Henrico County Manager John A. Vithoulkas said. “That 18-year-old novice is now a steady force, mentoring new employees from a bountiful spring of experience. He has faithfully loved his God, his family, his friends and those he serves each and every day.”

Today’s ceremony was capped with an unveiling of a street sign for Elvin Cosby Way, a previously unnamed road that connects Prince Henry and Dixon Powers drives. The road’s centerline was marked for the occasion in the official green from the Henrico County seal. The event also included recognitions from Virginia’s Congressional delegation, its House of Delegates and Senate, and a presentation of a Virginia flag that had flown at the state Capitol. Guests included Cosby’s wife, Lottie, as well as members of the Board of Supervisors and other federal, state and local officials and dignitaries. 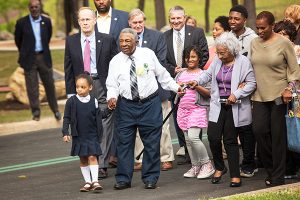 Elvin and Lottie Cosby have been married nearly 66 years and are members of St. Peter Baptist Church, on Mountain Road. Their extensive family includes two sons, both of whom have died, as well as five daughters.

In 2015, Henrico established the Elvin R. Cosby Award to recognize long-tenured employees for their outstanding service and contributions. In May, Cosby will receive the Judith M. Mueller Local Government Service Award from the American Public Works Association in recognition of service to a single locality for 20 or more continuous years. 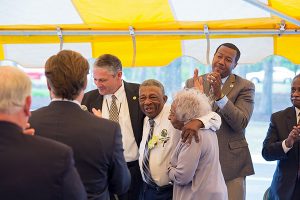