Update, Sept. 1: The Quioccasin Road lane closures will take effect beginning at 10 a.m. Tuesday, Sept. 5. A date for the demolition of the Quioccasin bridge will be announced as plans are finalized.

A series of road improvements associated with a redevelopment project at the Regency Square shopping mall will impact traffic along Quioccasin and North Parham roads during the next 12 months, beginning Wednesday, Aug. 23.

The first phase of work will include the demolition of the Quioccasin Road bridge, which provides access to the mall property west of Parham.

The lane closures are expected to remain in effect for about 45 days, while the work is underway. Crews expect to start the bridge demolition Monday, Aug. 28.

Additional lane closures will be announced in the coming months as work progresses on the Regency property. Once complete, road improvements related to the project will include turning lanes, new traffic signals and sidewalks.

For more information, go to henrico.us/projects/quioccasin-road-parham-road-construction. 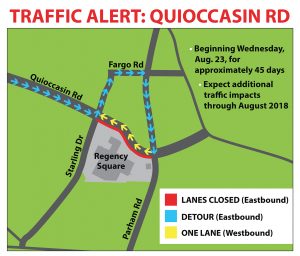