Henrico County will host 20 college quidditch teams from seven states and Washington, D.C., as they compete for the Mid-Atlantic Regional Championship on Saturday and Sunday, Nov. 1-2 at Dorey Park.

In conjunction with the tournament, the Division of Recreation and Parks will present Quidditch Fest from 1 to 4 p.m. Sunday, Nov. 2 at Dorey Park, 2999 Darbytown Road. The family-friendly event will feature hands-on quidditch demonstrations, broom-making, food and other fun inspired by the “Harry Potter” book series by J.K. Rowling.

Admission and parking for all activities are free and open to the public.

The Mid-Atlantic Regional Championship is organized by US Quidditch, a nonprofit organization dedicated to governing the sport adapted from the “Harry Potter” series. Quidditch is a coed, contact sport that combines elements of rugby, dodgeball and tag and is played by 4,000 athletes on more than 170 official teams across the United States.

Teams consist of seven active players who must carry brooms between their legs at all times while they try to score points for their team or interfere with their opponents. Each side features three chasers who work together to try to pass or kick a quaffle (volleyball) through the opposing team’s hoops. Two beaters hurl bludgers (dodgeballs) to disrupt the action and temporarily remove their opponents from the game.

Each side also has a keeper who defends his team’s hoops and a seeker who chases the snitch, which is a tail attached by Velcro to the shorts of the snitch runner. The snitch runner is a neutral player dressed in yellow who tries to avoid capture by either team.

A game ends when the snitch is captured, giving the capturing team 30 points — an amount equal to three goals. The team with the highest point total wins.

Matches and quidditch demonstrations for youth will be held from 9 a.m. to 8 p.m. on Nov. 1 and from 10 a.m. to 5 p.m. on Nov. 2. More than 400 players on 20 college club teams from Virginia, Delaware, Maryland, New Jersey, North Carolina, Pennsylvania, West Virginia, and Washington, D.C. will compete for 10 berths in the US Quidditch World Cup VIII, to be held next spring in Rock Hill, S.C.

The Mid-Atlantic Regional Championship is supported and cohosted by the Division of Recreation and Parks and VisitRichmond. For more information, go to VisitHenrico.com or USQuidditch.org/about/MidAtlantic-RC. 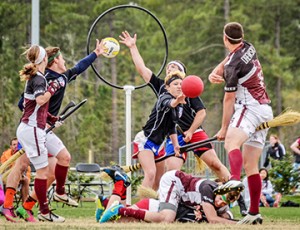