Civil War buffs and novices alike can get a front-row seat at the remaking of a key moment in American history when Henrico commemorates the 150th anniversary of the Battle of New Market Heights with reenactments, living history exhibits and other activities Sept. 27-28.

The event will be held at the Runnymede property adjacent to the Malvern Hill site of the Richmond National Battlefield Park, 8750 Willis Church Road, located between Darbytown Road and Route 5/New Market Road. Gates open at 9 a.m.

Admission and parking are free. Handicapped parking will be available at the site. Other visitors will be directed to off-site parking and then shuttled to the event. Visitors should plan to arrive at least one hour prior to a battle reenactment.

The event also will include educational programs for 4th and 5th grade students on Sept. 26. Public, private and home-school students are welcome; classes can register by calling (804) 652-3409.

The weekend will feature reenactments of three battles fought in Henrico — New Market Heights and Fort Harrison, both of which took place on Sept. 29, 1864, and the Second Battle of Deep Bottom, which stretched Aug. 14-20, 1864.

More than 1,000 reenactors from across the country are expected for the battles, which are being coordinated and choreographed by Rear Rank Productions. Battle reenactments are set for 11 a.m. and 3:30 p.m. Sept. 27 (Fort Harrison and New Market Heights, respectively) and 1 p.m. Sept. 28 (Deep Bottom).

When they aren’t watching a reenactment, spectators can take in the sights, sounds and tastes of Civil War camp life. Activities will include:

Spectators literally will be part of the action during the reenactment of the Battle of New Market Heights, as they will watch from a viewing area in the middle of the battlefield. The simulated combat will swirl around them as they listen to a narrator describe the battle unfolding before them.

The sightlines at the battlefields will be free of contemporary intrusions, such as power lines. The soldiers will look the part as well. Everything reenactors wear and use — from the insignia on their uniform and the weapon on their shoulder to their eyeglasses, watches, footwear and camp paraphernalia — will be appropriate for 1864. 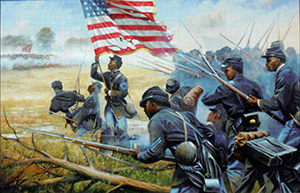 The Battle of New Market Heights was part of a broader Union assault against Confederate defenses southeast of Richmond. Several regiments from the U.S. Colored Troops, which had crossed the James River at Deep Bottom the night before, spearheaded an attack on elevated, entrenched Confederate positions along New Market Road near Four Mile Creek. At the same time, additional Union forces moved against Fort Harrison a little more than 2 miles to the west.

Fourteen African-American soldiers received the Medal of Honor, the nation’s highest military award, for their heroism in combat at New Market Heights. Two white officers serving in the USCT earned the award that day as well (black soldiers were barred from holding commissioned ranks of lieutenant and above). Over the course of the Civil War, 18 Medals of Honor were earned by black soldiers.

The actions of the USCT units at New Market Heights helped dispel the notion, widely held at the time, that black soldiers were unfit for combat.

Following the New Market Heights reenactment, Henrico will hold a ceremony honoring the Medal of Honor recipients. The descendants of three medal winners — Sgt. Alfred Hilton, Sgt. Edward Ratcliff and Lt. Nathan Edgerton — will attend and will be recognized as part of the ceremony.

Watch a sneak preview of the event in the video below!