Henrico County is in the midst of a blitz to repave and resurface roads following a harsh winter of abuse.

Early this year, the Department of Public Works launched a series of projects to improve about 92 miles of high-volume secondary roads and 114 miles of neighborhood streets.

The amount of repaving and resurfacing represents increases of 115 percent and 55 percent, respectively, over totals for 2013.

Crews are scheduled to work through the fall. Because of this, Public Works is asking drivers to be alert for temporary lane closures and to be patient as projects progress.

At times, residents may notice a break in activity between stages of work.

These projects proceed as follows:

For neighborhood streets, one of two methods of resurfacing is used. Each usually takes four to six weeks to complete and provides five to seven years of optimum use.

In the “chip seal” method: 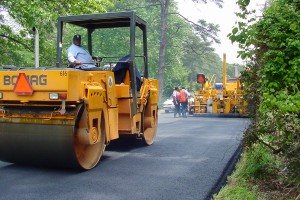 Another method of resurfacing effectively recycles the pavement in place before sealant is applied:

For more information on road maintenance and other Public Works projects, go to henrico.us/works or call (804) 727-8300.