Henrico County has introduced a new emergency alert system that allows public safety officials to send critical voice, text and email messages to residents and others on their landline phones, computers and wireless devices.

The Henrico County Community Emergency Notification System is overseen by the Division of Fire and powered by CodeRED, a high-speed, mass notification system licensed by Emergency Communications Network LLC. 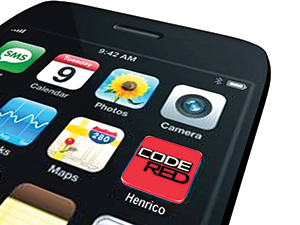 Henrico’s system is equipped to distribute messages faster, more efficiently and at a significantly lower cost than the emergency alert system that had been in place since 2007. The new system costs $53,234 per year, about half the cost of the previous system.

“The new Community Emergency Notification System represents a significant cost savings for the taxpayers of Henrico County,” Fire Chief Anthony E. McDowell said. “It also helps the county respond during emergencies, by providing timely, critical information to residents and others wherever they are — at home, at work or out with their mobile devices.”

The system gives designated emergency personnel the flexibility to send messages countywide or to a selected geography, which could be preferable in the event of an escaped fugitive, a spill of hazardous material or some other localized incident.

The system is already capable of distributing voice messages to landline phones at homes and businesses using the county’s 911 system in reverse. Individuals must register if they would like to receive messages on their wireless phones, computers and other mobile devices. To sign up, go to www.HenricoAlert.org. There is no cost to register. Standard messaging fees may apply.

Users of wireless phones and other mobile devices who register also have the option to receive general notifications of nonemergency situations, such as major road closings.

More than 145,000 landline phones and an estimated 172,000 wireless phones and other mobile devices are in use in Henrico.

The Community Emergency Notification System is designed primarily for Henrico residents, but it also is open to people who work in or drive through the county and others who would like to receive the emergency messages.

A call from the system will appear on a phone’s ID display as “Emergency Comm” with the number, 1-866-419-5000. If the call is missed, a person will be able to dial the number to hear the message in its entirety.

Henrico’s contract with Emergency Communications Network took effect in July. A few months later, the system was used to avert a potential crisis when an elderly man went missing from his home in western Henrico. Emergency officials sent out a description of the man to about 7,000 phone lines within 1.6 miles of his home. A woman who had received the message was driving in Goochland County when she spotted a man who matched the description walking along the road. She called 911, which allowed emergency responders to reunite the man safely with his family.

As an additional feature to Henrico’s emergency notification system, anyone who downloads the CodeRED app on their iPhone or Android device can receive other localized messages if they are traveling in areas covered by CodeRED. In Virginia, 25 other localities, including Goochland and the city of Colonial Heights, use CodeRED.

For information about the emergency notification system: