In an impressive display of mobile power, HENRICO disembarked her Marines at Da Nang, South Vietnam, in early March 1965, returned to Okinawa for a second landing team which reached Da Nang 15 April. By 21 April, the ship embarked a third landing team bound for Chu Lai, South Vietnam. Offloading these troops 7 May, HENRIC0O made a fourth passage to Okinawa to return with the headquarters unit of the 3d Marine Division, which arrived in Chu Lai 21 May.

Following her performance off South Vietnam, the ship sailed from Yokosuka, Japan, 28 May for San Diego, arriving 16 June. During the next thirteen months HENRICO operated out of San Diego along the coast of Southern California, conducting squadron exercises and supporting amphibious training operations. After embarking Marines at San Diego, she sailed for the Far East 27 July 1966, and debarked her passengers at Da Nang a month later.

During the next seven months she carried troop reinforcements and replacements from Okinawa and the Philippines to American bases in South Vietnam. In addition she ranged the coastal waters of Vietnam from the demilitarized zone to the Mekong Delta, supporting important amphibious assaults against Viet Cong coastal strongholds. She departed Vietnam late in March 1967 and returned to San Diego the following month. Maintaining her readiness in support of amphibious assault operations, HENRICO into mid-1967 remained ready to resume her important duty as part of America’s powerful naval force in the Far East. 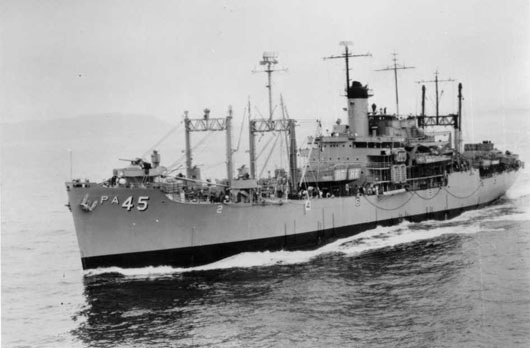 View of USS Henrico in the Vietnam era (1960’s). From the US Naval Institute photo collection.