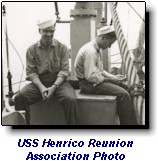 After
a career of exemplary service, the “Happy Hank” was decommissioned 14 February
1968 and placed in reserve. She was ultimately disposed of in October 1979 by the
Maritime Administration (MARAD), US Department of Transportation.

The three views of the USS HENRICO on these web pages are dated from the
World War II, Korea – Cold War (1950’s) and Vietnam (1960’s) eras. The photos
were obtained through the US
Naval Institute, Annapolis, Maryland photo collection.