Early in 1950 HENRICO took part in amphibious exercises in the Caribbean, returning to San Diego 8 April 1950. Soon afterward peace was shattered by the invasion of South Korea, and HENRICO was immediately called back to the western Pacific. As Korean and American ground troops struggled to stem the Communist advance, HENRICO and other ships embarked the 1st Marine Brigade and sailed 12 July for Korea. She developed mechanical trouble which forced a return two days later, but skillful repair work had her at sea again 18 July and by 2 August she was with the original formation as they steamed into Pusan with the vitally needed troops.

In the early stages of the Korean War, HENRICO played an important part. She landed troops at the decisive Inchon beachhead 15 September 1950, one of the most brilliantly executed amphibious operations in history. As United Nations troops swept northward, she sailed to various ports deploying and supplying the soldiers.

In November Chinese troops made their appearance on a massive scale, and by December U.N. ground units in the Wonsan-Hungnam area were cut off. During December HENRICO and other ships evacuated thousands of soldiers from the two ports to stabilize the lines farther south. Command of the sea had again, as so many times in history, meant the critical difference.

The veteran attack transport arrived at Seattle 22 March 1951, and after repairs and amphibious exercises sailed again for Korea 16 October 1951. During this second tour she carried troops to strategic points on the coast, and took part in amphibious operations for training purposes. She arrived at San Diego 2 July 1952, and in September returned to Pearl Harbor for repairs and training.

HENRICO sailed again for Korean waters 7 March 1953, resuming the important job of redeploying troops along the coasts and to Japan. During July and August she operated between Pusan and Japan, and joined in the transfer of prisoners following the armistice agreement. For her outstanding performance during the first months of the conflict, HENRICO was awarded the Navy Unit Commendation. 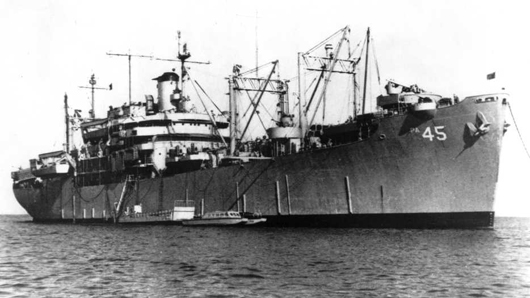 View of USS Henrico in the Korea – Cold War era (1950’s). From the US Naval Institute photo collection.