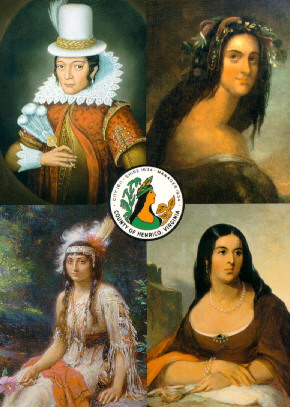 According to Native American lore, her parents knew her as “Amonte” and her secret clan name was “Matoaca.” Her European Christian friends called her “Lady Rebecca.” Many have revered her as the “mother” of our nation, the female counterpart to George Washington. We know her as Pocahontas, legendary Indian princess, daughter of the mighty Chief Powhatan.

Four hundred years ago she lived part of her life in what is present-day Henrico County. Pocahontas forever influenced the history of the County, the Commonwealth of Virginia, and America. It is her image that graces the Henrico seal and flag.

Pocahontas’ father, Chief Powhatan of the Algonquin Nation, ruled a confederacy of Powhatan Indian tribes in Henrico and eastern Virginia. A hunting party captured Captain John Smith in 1607 west of Jamestown along the Chickahominy River. Captain Smith later wrote that he was taken to Powhatan and sentenced to death. In his “General Historie” published in 1624, Smith described his controversial rescue by Pocahontas.

“Having feasted him . . . A long consultation was held, but the conclusion was, two great stones were brought before Powhatan: then as many as could lay hands on him, dragged him to them, and thereon laid his head, and being ready with their clubs, to beate out his braines, Pocahontas the Kings dearest daughter, when no intreaty could prevaile, got his head in her armes, and laid her owne upon his to save him from death: whereat the Emperour [Powhatan] was contented he should live to make him hatchets, and her bells, beads, and copper . . .”

Even though relations between the Indians and the settlers were hostile at times, Pocahontas and John Smith maintained a friendly relationship. In 1608 Pocahontas may have saved Smith’s life a second time with her warning that Powhatan again wanted him put to death.

Pocahontas was kidnapped by the settlers in 1613. She was betrayed by two Indians for a copper kettle and lured onto a ship in the Potomac River. She was brought to Jamestown and used as a political pawn in negotiations with her father. During this time she was taken to the Citie of Henricus for religious instruction. Pocahontas became the first Native American in Virginia to convert to Christianity. She was baptized an Anglican and given the name Rebecca.

In 1614 Pocahontas married John Rolfe, and according to Native American lore and local tradition, they made their home in what is now Henrico’s Varina District. The marriage brought peace between the English and the Powhatan tribes — an accomplishment that would affect the rest of American history.

Two years later Rolfe took Pocahontas and their son Thomas to England. The arrival of Pocahontas in London was well publicized. She was presented to King James I, the royal family, and the rest of the best of London society. While preparing to return to her native land, Pocahontas became ill and died at Gravesend, England, where she was buried.

After growing up in England, Pocahontas’ son Thomas returned to his mother’s homeland, became a militia officer and commanded a frontier fort in western Henrico on the James River.

Sources of information: Association for the Preservation of Virginia Antiquities, The United Indians of Virginia, The Virginia Historical Society, Dr. Louis Manarin, author of The History of Henrico County and The Complete Works of Captain John Smith (1580 – 1631), in three volumes, edited by Philip L. Barbour, v.II, p. 151.

To read more about Pocahontas, visit the Historic Jamestown site.

To read about Pocahontas and the official Henrico County seal, use this link.

Visit the 1611 Citie of Henricus, where visitors can watch a “living history” unfold before their eyes when they set foot on the grounds where Pocahontas, Chief Powhatan and the early English settlers walked and talked together.